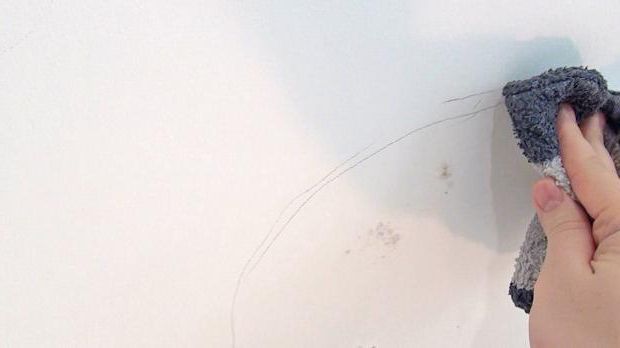 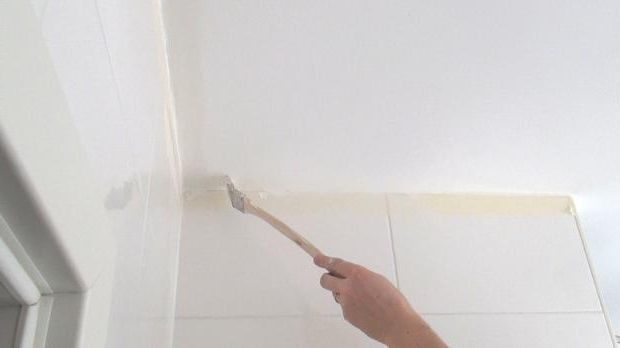 MOLD ON THE CEILING

The situation is not surprising: one day, in a prominent place in the bathroom, there are traces of mold on the ceiling. Condensation has repeatedly settled where a rafter opens into the ceiling and creates a cold bridge—optimal conditions for mold growth. Fortunately, the mold traces were noticed early. Because the do-it-yourselfer can still lend a hand himself with surface mold, once the spores have eaten their way deeper into the material, a specialist must often be consulted. Fortunately, there is still an opportunity to eliminate the mold from the ceiling yourself.

The tools required to remove mold on the ceiling are versatile. However, it is not particularly exotic. First, you need a pencil and a coarse, dampened cloth. Besides, there is a spatula with a spatula cup, a sanding pad, and a paint roller with a flat brush and a squeegee for rework.

The material is no less colorful. If you want to avoid the use of chemicals, you can also use high-percentage alcohol (at least 70%) as an alternative. However, this has no bleaching effect on mold stains and is extremely flammable! In addition, cover film or another cover material, as well as filler, a roll of masking tape, and damp room paint, are required. The need for color depends on the dimensions of the ceiling. How to calculate the color requirement is in our article Painting a wall: 5 tips for preparation.

FIGHT THE MOLD FROM THE CEILING

Before reaching for the Schimmel-Ex, all sensitive surfaces in the vicinity must be covered with foil. Because Schimmel-Ex often contains chlorine, and this shouldn’t drip anywhere where it doesn’t belong. Once this is done, the marked areas are generously sprayed with the Schimmel-Ex. The bottle indicates how long the agent has to take effect. Usually, it is 20-30 minutes.

After the end of the exposure time, the areas with mold on the ceiling are thoroughly wiped off with a damp, coarse cloth. Whenever possible, no traces should be overlooked. Again, take your time and work on all of the marked areas. This removes spot by spot. With the right care, all mold on the ceiling should be able to be removed without any problems. If the ceiling color comes off in places, don’t panic! False shyness is not helpful in this case, and the ceiling will have to be repainted anyway.

As was to be expected, the mold control peeled off the paint from the ceiling in some places. However, that is not a problem. Every motivated do-it-yourselfer can quickly remedy this in order to restore an even surface. Some filler is mixed in a spatula and applied to the affected areas. Spread well with the spatula! As soon as all areas are closed again and, the filler has dried, the fillings are worked on again briefly with the sanding pad. This ensures that the surface is uniformly even.

We have already succeeded in eliminating the mold on the ceiling and temporarily curing the paint rubbed off. But now the traces of the struggle must also be removed. However, just quickly painting over the affected areas is not enough. If you don’t want to experience the wonderful play of colors on the ceiling later, you will not be able to avoid completely repainting the ceiling. In order to carry out the work as efficiently as possible, the upper edges of the walls are first masked with painter’s tape. After all, no color should arrive here. If chlorine was used to remove mold, the surfaces and floor in the room should already be covered. Otherwise, catch up now!

The use of damp room paint is recommended for painting in damp areas such as the bathroom. The paint is now sufficiently mixed, and a stripping grid is placed ready for the paint roller. But first, the corners are painted with a flat brush. With larger rooms, it is advisable not to paint all corners in one go, but in stages and only then to draw a few strips with the paint roller. So you can always work wet on wet.

Tip: Good illumination of the ceiling from the floor makes the work a lot easier. Ceiling wash lights, for example, help to identify and correct irregularly covering areas on the ceiling immediately.

If the second coat has also been carried out completely and satisfactorily, the painter’s tape is pulled back from the corners before the paint is dry. Getting rid of the mold on the ceiling was a wise decision. The ceiling looks like new again!

RESULT OF THE MOLD CONTROL

A lot is behind us in the fight against mold: Marking and removing mold on the ceiling, touching up paint abrasion, and repainting the ceiling. But the effort has clearly paid off. The mold on the ceiling is gone. An early discovery was crucial. Because surface mold is still relatively easy to fight, and it is also good for your health if traces of mold on the ceiling are detected as early as possible.

So, all in all, a successful project! So that the mold does not come back so soon, you should think about how sufficient ventilation of the bathroom can be ensured in the future. After all, it is the backlog of moist air that makes the mold on the ceiling flourish.